In men’s action, a 44-23 halftime lead morphed into a nail-biter as the Warriors needed a buzzer-beater triple from Nick Marlo (Sesser) to send the game into overtime. From there, a tired team was able to outlast the Cobras, winning by a final score of 96-95. 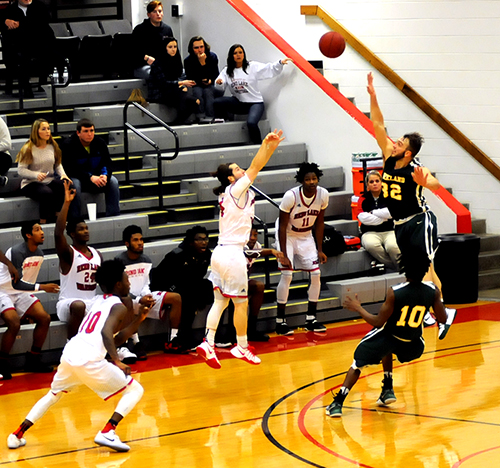 Nick Marlo, of Sesser, buries the clutch three to send Rend Lake College into overtime against Parkland College. Click on the image for a larger view.
(Reece Rutland/Public Information)

“The second half, they went zone and we went stagnant,” explained Warrior’s Head Coach Randy House. “We got the lead in the first half by playing hard and aggressive. We were getting to the rim, kicking the ball out and hitting threes, and that fed the post. Second half they switch to zone, and we started just standing around. We would let the shot clock run down and then try to force one up.”

“We were fortunate to stay in the game. Fortunately we had the lead we did. It came down to Nick hitting a shot to send it to overtime. Luckily, that was about exactly how we drew that play up. We were tired. We’ve got to learn to put at least 35 minutes together instead of just 20.”

With the win, Rend Lake moves to 5-1 overall and 2-0 in the Great Rivers Athletic Conference.

On the Lady Warriors side of the ball, both teams battled neck-and-neck with Rend Lake managing to scrape out a 39-34 lead going into the half. But, Parkland’s women surged in the closing minutes and refused the reliquesh the lead, felling the Lady Warriors 87-82 on their home opener.

The Warriors return to action after the Thanksgiving break, hosting John A. Logan College. Women tipoff at 5:30 p.m. and the men have a 7:30 p.m. start time.