Despite the young team, head coach Krystal Gundy sees a lot of promise and is taken with the growing leadership of her pair of veterans as well as several, quickly developing sparks in her first-year class.

“My expectation is to just continue to build. I have a young team this year. We have two sophomores, so I’m looking to feed a lot off of them. We have 12 freshmen. But, we have some freshmen that play like they are sophomores already. They look up to our veterans, Cali [Carney] and Amayha [Dycus]. They see how they play in practice and how they react to me, and they are following that example, stepping up in and really leading everyone else at becoming better,” Gundy explained.

“Cali is a little quiet, but don’t let that fool you. On the court she is very feisty and aggressive. She leads by the example she sets on the court with her actions. Amayha is much more vocal. She also has a very high basketball IQ, and she’s in a great position to lead as our point guard. So, I really feel like I have the best of both worlds.”

After finishing 14-11 overall and going 8-8 in the Great Rivers Athletic Conference (GRAC), the team is looking to continue to build in a very competitive division by playing hard-nosed, fundamental basketball that will be highlighted by defensive wrinkles to drive a break-away offense.

Gundy says she will be focusing on switching her defenses up often during the game. She said the team will need to focus on that side of the ball as she changes things up on the fly to shake up the opponents and create turnovers.

Hovering around third or fourth in the rankings last season, Gundy has set an early-season goal of staying in the top five seeds in the conference. But, she warns that the road won’t be easy.

The Lady Warriors have already got a chance to see a few of their big opponents early in a jamboree setting, and Gundy says that many of the teams are long or big or fast or all-of-the-above.

“We are going to have to compete, no doubt about it,” she said.

“Our motto this year is ‘All In.’ We have to battle and compete at a high level all the time. We never have all the other tools that our D1 opponents have so we have to drive and compete with everything we have, and that’s just doing the little things and doing it our way.”

“I like to score layups instead of running an actual offense,” she explained.

The Lady Warriors won’t make their first home stand until Nov. 22 when they host Parkland College for a 5:30 p.m. tipoff.

They kick off the regular season at 6:30 p.m. Nov. 9 against Jefferson College in Hillsboro, Mo.

Gundy is hoping that a large contingent of local players will help pack the stands this season. With players from Carbondale, Mt. Vernon, Pinckneyville, Johnston City, Benton and Bluford, lots of local talent will be on display. 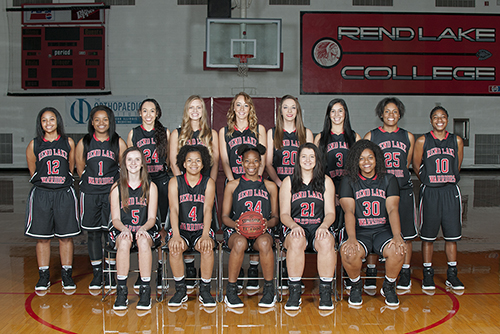