INA, IL (Oct. 19, 2016) - For the first time since the 2009 season, the Rend Lake College Basketball Warriors will be hosting their 2016-17 Region XXIV Tournament in James “Hummer” Waugh Gym to fight for a spot at Nationals.

With the season promising to be another competitive year in both the region and Great Rivers Athletic Conference (GRAC), Associate Coach Tommy Holder is looking for his team to capitalize early, maximizing their showing at home late.

“We want to try and fight for the highest seed we can to try and get a bye. That way, we can see everyone else play and know what we need to prepare for. You are going to see people put in different wrinkles at the end of the year. But, even if things go bad, we are still playing at home,” Holder said.

It won’t be an easy path for the Warriors. After a 16-14 overall record last season and finishing 7-11 in the conference, the Warriors aren’t expecting anyone to roll over on them during the 2016-17 season.

“Conference is tough. It’s a bear every year. With us being Division II and them being Division I, the players aren’t any different talent-wise, but you just see some great athletes. There are a lot of big, strong guys playing. We get to teach our guys how to play big, they just get to recruit them big,” explained Holder.

Holder and Head Coach Randy House feel that they have some solid building blocks to work with and a good mix of young, fiery talent mixed with some emerging veteran leadership.

The 2016-17 team is split very evenly between freshman and sophomores. Seven players are stepping onto the court as a RLC Warrior for the first time. Eight will be taking the hardwood in their second year with the college.

“I feel like as far as leadership in scoring or doing things on the court, the sophomores are starting to step up and take on that role. We will be looking for more of that from them. Cory (Thomas) averaged 17 points a game last year. He will do the same, if not more this year. Adrian (Smith) has gotten a lot better by really extending his game. Anton (Ivy) is a defensive presence. He blocks four of five shots a game. It’s going to be an exciting season. We have a team that can really get up and down the court,” said Holder.

But, that speed is going to be fed by a defensive mentality. Holder explained that the team is banking on the disruptive style to trip opponents up and feed the energy of the team.

“We are going to be a defensive first team. Everything we do, defense is going to be the staple. It needs to feed our offense. Basically, when you are playing defense, it’s like you are forcing yourself to be energetic. Last year, we started out the games slow. So, we would put ourselves in the hole and then try and fight back. But, when you expend that much energy trying to come back, at the end of the game you might not have enough left in the tank. Now, we want to jump on people early with our defense and see what that leads to,” he said.

While the sophomores have developed during their time with RLC, the coaching staff is seeing a lot to be positive about with the newcomers. Holder said that many of the freshman are already displaying strong defensive fundamentals and are showing a lot of fire. He said that the group still needs some offensive development but is optimistic with the group’s motivation.

The season opens at home against Lincoln Land Community College at 7 p.m. on Nov. 9. For more information about RLC basketball, visit rlc.edu/hoops. 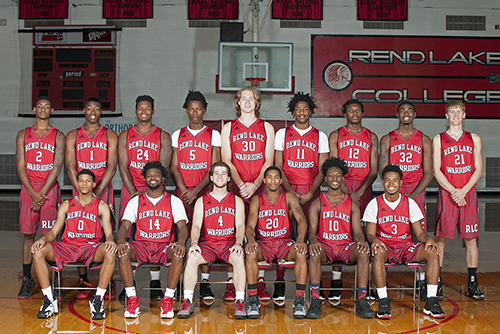