Work on ‘Audrey’ the plant ongoing for Spring Musical

INA, Ill. (March 10, 2014) – When the Rend Lake College Spring Musical was announced as “Little Shop of Horrors,” the Theatre Department took on the great task of creating several talking, singing, and eating puppet plants that would tower over the actors and the audience. With such a large project to complete in a short amount of time, RLC student William Kimble and Art Associate Professor Melissa McClement-Engler have been putting in extra hours to make “Audrey” one of the biggest and most intricate props ever to grace the RLC Theatre stage.

Kimble, a Thompsonville native, began work on the biggest man-eating plant named Audrey IV several weeks ago. He said most of the woodwork and mechanics come from videos and pictures he’s watched since finding out about the prop.

“[Art Professor] Therese Melena asked me to build it, so we began researching it,” said Kimble. “We only have about half the time and a much different budget to work with than the film. I’m doing most of it out of my head, based on pictures and videos. It’s taking a lot to make the shape just the right way and doing the mechanics of the head and jaw.” 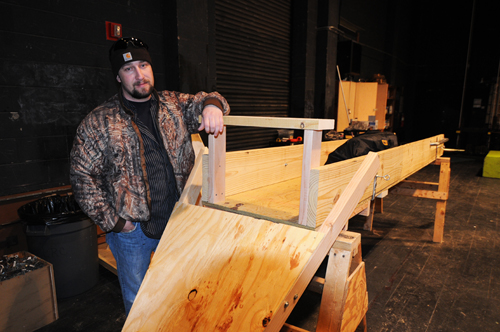 Rend Lake College student William Kimble poses at the head of "Audrey IV," the talking and singing plant for the RLC Spring Musical "Little Shop of Horrors." Kimble has worked for weeks to create the giant prop, which may be as tall as 15 feet above the stage. Art Associate Professor Melissa McClement-Engler will work to make the plant life-like after the skeleton is complete. Click on the image for a larger view.
(ReAnne Palmer / RLC Public Information)

During the play, Audrey IV will talk, sing, and even quench its thirst for flesh and blood by swallowing actors whole. This means the prop will need to be controlled on the inside, as well as leave room for actors to be eaten and slide through the plant’s throat.

At the base of the prop, two additional people will be required to help move the throat and head of the plant both vertically and horizontally. Kimble said he expects the whole thing to weigh between 900 and 1,500 pounds, and be between 12 and 15 feet tall.

“Shaping the head out of wood has been the hardest part so far,” Kimble added. “I’m worried most about the time constraint, especially since we’ve had all the snow days. I think I’ve still got 12 to 18 hours left to do on it, so it should be done the week after Spring Break.”

Melena added she had her eye on Kimble for this project after he showed great aptitude and skill in a previous class.

“William was an Art Appreciation student of mine over a year ago,” said Melena. “I could tell then how artistic and how intuitive he was, and I badgered him until he took more art classes. He’s very articulate and fantastic, and he’s exactly who you’d want to be doing a project like this and as a student.”

Throughout the musical, the plant will get larger and larger, eventually becoming Audrey IV, so while Kimble has been behind the stage working on the large prop, McClement-Engler has been creating the younger plants, Audrey I, II and III, out of foam and tubing.

“The smallest pod is made out of high-density foam, and it will work like a little puppet,” said McClement-Engler. “The second one has some expandable foam in it, and the third has the same material, but it’s big enough for a whole person to fit inside. William has done a great job making the skeleton of Audrey IV and I’ll be doing the outside appearance.”

She added the plants will resemble a Venus Fly Trap, including teeth and claw-like fingers, but they will also have a touch of fantasy, such as full lips. She said the two smallest plants are nearly completed, and her work on Audrey III has already begun.

“There’s going to be a lot of work done over Spring Break,” said McClement-Engler. “Everyone has done a really great job of working hard on this production, especially Therese who is passing a lot of information to her theatre tech class. This is my first experience with something like this, and it’s been pretty incredible.”