The annual show will resemble the popular television show “Whose Line Is It Anyway?” with a number of games and audience interactions. Tracey Webb, Thespian Troupe sponsor and RLC Theatre Professor, said the club meets once a week to practice the craft of comedy improvisation.

“The games we play improve the actors’ ability to ‘live in the moment,’ which is a huge part of seeming real to life on the stage,” said Webb. “In live theatre, things often go wrong. Improvisation skills keep actors on track and quite often can save a show from falling apart when somebody drops a line, drops a prop, struggles with a piece of scenery and so on.” 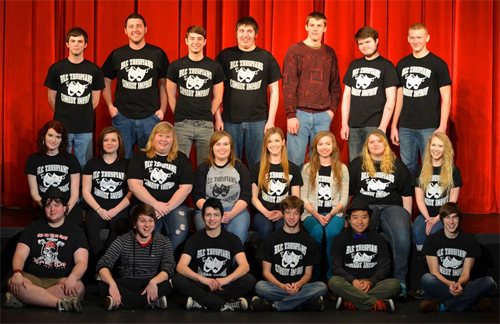 Webb added the show will be a real-life practice session for the Thespians, who will count on active audience members and participation.

“The RLC Thespians are going to take suggestions from the audience and improvise entire scenes on the spot,” said Webb. “Audience interaction is a must. In fact, often audience members are asked to join the Thespians on the stage and participate in the many acting games employed.”

“It’s not just fun for the Thespians, but for the audience as well,” said Cardwell. “They have a chance to have their own moment on stage, in the bright lights.”

The RLC Thespian Troupe began in 2002 when several students asked for a club where they could work on comedic skills, practice improvisational exercises and sketch comedies. The club regularly entertains at local grade and high schools, nursing homes, hospitals, and events.

There is no cost for the show, which is expected to last for an hour and a half. Donations are accepted and will be used for the club’s annual trip to see Second City, a theatrical company famous for comedy improvisational skills, in Chicago.