INA, Ill. (Dec. 17, 2013) – After tragedy struck in Royalton earlier this year, one local family is turning their grief into generosity by creating an endowment in honor of a son and brother who was killed in a mine accident.

The Timothy Keith Chamness Memorial Scholarship was created with the Rend Lake College Foundation by Tim’s family and the help of Knight Hawk Coal LLC. The $60,000 endowment will provide funds for six students annually who are enrolled in the Mining Technology program at RLC, starting in the fall of 2014. The announcement was made last week during the RLC Foundation Annual Dinner.

During the event, Tim’s father Jim Chamness spoke on behalf of the family and the scholarship by addressing the need he sees in the area as a guidance counselor at Zeigler-Royalton High School.

“We decided that we want to keep Tim’s name and memory alive in the form of a scholarship,” he said. “We want to help the children of the Rend Lake College district and many more students in the future.” 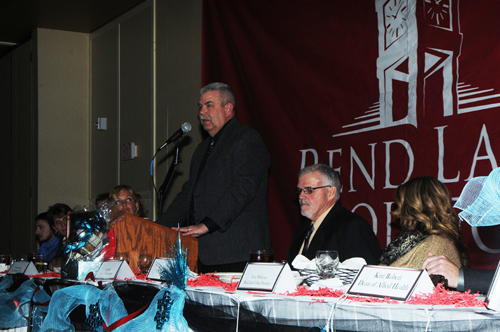 Honoring a legacy
Jim Chamness, STANDING, father of Tim Chamness, spoke during the Rend Lake College Foundation Annual Dinner last week about the Timothy Keith Chamness Memorial Scholarship; an endowment that will honor the legacy of a young man who died in a mine accident in February. The scholarship will provide funds for students in Rend Lake College's Mining Technology program.
(ReAnne Palmer / RLC Public Information)

Chamness added that the endowment would not have been possible without the help of Knight Hawk Coal LLC and the employees of the Prairie Eagle South Mine.

“There are many generous people out there, including Steve Carter, the president of Knight Hawk Coal Company, and the employees of Tim’s mine,” said Chamness. “Carter and the employees of the mine donated their $500 safety bonus for the quarter to the scholarship fund. They allowed us the opportunity to turn that $60,000 into an endowment with the Rend Lake College Foundation, and hopefully, it will help other students.”

Tim Chamness was a 28-year-old graduate of Zeigler-Royalton High School where he was an outstanding athlete.

“The Chamness Family shows by example what it means to turn one family’s tragedy into another person’s saving grace,” said RLC Foundation CEO Shawna Manion. “By establishing this endowment, they have insured that Tim’s name, and his legacy, will live on through the form of a financial ‘helping hand’ for people trying to better their own lives, their futures, and the future of their families. I never had the opportunity to meet Tim, but I know beyond a shadow of a doubt that he is looking down on his family with his famous smile, and is proud of them for their selfless generosity during such a time of grief.”