INA, Ill. (May 6, 2013) – Larry Manning will be seated as a new member of the Rend Lake College Board of Trustees, Tuesday evening, at its regularly scheduled May meeting.

Manning, 57, of Belle Rive, owns and operates a 3,000-acre family farm with his brother and son, Paul and Steven Manning. Larry Manning has farmed all his life.

He was elected in April to the RLC Board. He has been on the Tri-County Electric Cooperative Board for 15 years and served more than 16 years on the Bluford Grade School Board. He said one reason he chose to run for the RLC Board is that his service in Bluford was coming to an end and it was time for a change.

“I think being on the Rend Lake College Board is something new and exciting for me so I thought I’d try it,” said Manning. “I want to thank all of those who supported me in the election.” 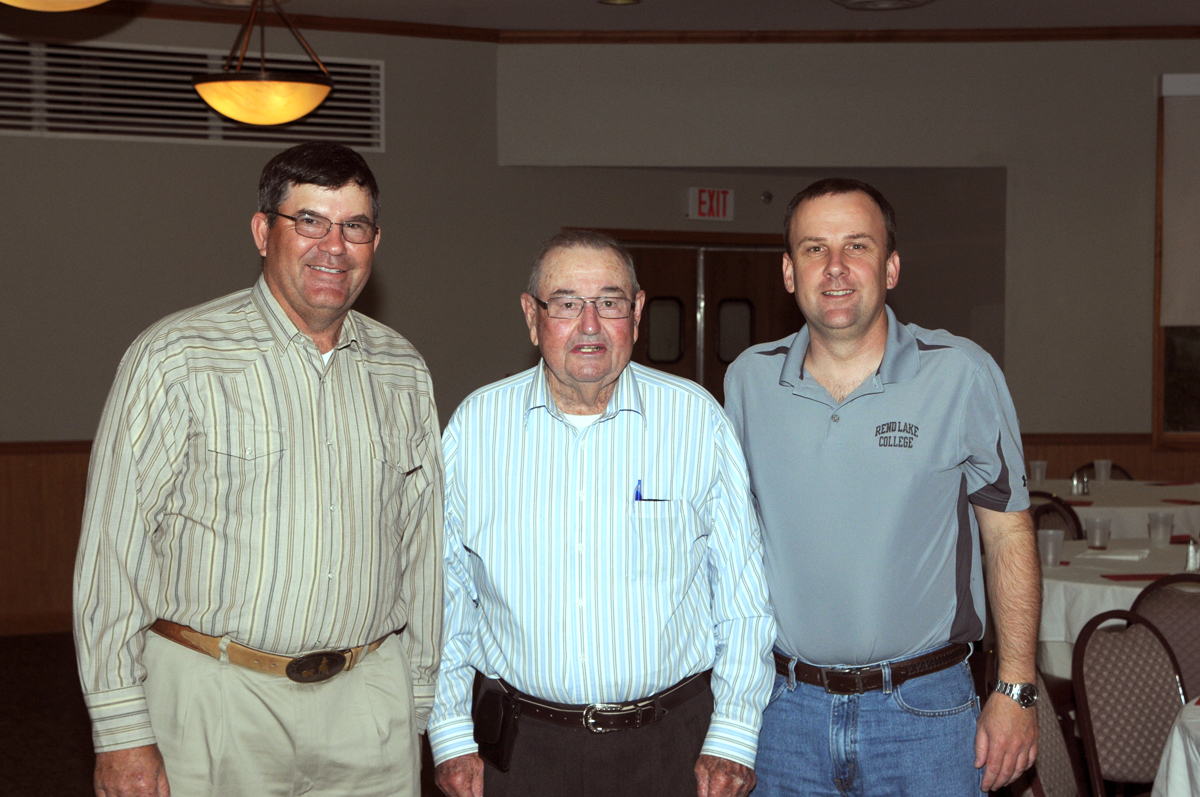 Larry Manning (LEFT) of Belle Rive will be seated to the Rend Lake College Board of Trustees on May 7. He succeeds retiring member Marvin Scott (CENTER) of Belle Rive. Also pictured is RLC President Terry Wilkerson.

Manning is dedicated to local youth and their education beyond high school.

“I didn’t go to college,” he said. “I didn’t think I had the time. I don’t want any more young people making the mistake I did. I think the more education the better.”

Manning’s ties to RLC span generations. His wife Debra, son Steven and daughter Mary, are all RLC alumni. Debra graduated in 1980 with an Associate in Applied Science from the nursing program. Steven graduated with a perfect 4.0 GPA from the agriculture production and management program in 2001. Steven served as RLC’s Student Trustee on the Board, and he was the recipient of multiple scholarships, including the Doug Leeck Memorial, Citizen’s Scholarship of America, Bluford FFA, and Jefferson County Farm Bureau Foundation. Steven transferred his degree to Murray State University where he earned a master’s degree. Mary - now Mary Minor - was also an outstanding student at RLC. She graduated with dual degrees in Science and Arts in 2004, transferred to Southern Illinois University in Carbondale, and now teaches at Waltonville Grade School.

Manning replaces retiring Board Member Marvin Scott - a mainstay of 35 years of service to the RLC District. Scott is a Belle Rive business owner and farmer. He has served on RLC’s board longer than any member in history. Scott is among the top 10 of Illinois’ longest-serving community college trustees. He represented RLC on the Illinois Community College Trustees Association Executive Board for more than a decade.

“Marvin and I go way back,” Manning said.

“He is a very good choice,” Scott said of his successor. “I think he will look out for the students. He’ll be a good board member. He will do his job. I think he’s a good citizen and he will have the right interests as a board member at Rend Lake College.”

The May 7 meeting of the RLC Board of Trustees will begin at 6:30 p.m., in the Student Center. Scott will be in attendance for an outgoing trustee presentation scheduled at the beginning of the meeting.