INA – Maddelynn and Alexandria Hawkins are leading the way on a fast track through academia. After taking advantage of every dual credit and dual enrollment opportunity Rend Lake College had to throw at them in their high school careers, the 18-year-old Pinckneyville twins will walk across their high school graduation stage with college diplomas already in hand.

“It is almost surreal,” Maddy said.

Technically, they will graduate from college before high school. RLC’s commencement ceremonies are Friday night and Pinckneyville Community High School’s will take place May 18.

It began in the eighth grade.

“Summer health class with Dr. Denny,” Alex said of their first RLC dual-credit class. “I don’t know why I remember that.”

According to their mother, Casey Hawkins, the twins completed the dual-credit health course with better marks than their college-age classmates. She remembers telling RLC Murphy-Wall Pinckneyville Campus Coordinator Heather Bauersachs at that time that her girls were going to be the first two students to graduate from RLC and PCHS at the same time.

“Heather always reminds me of that,” she said. 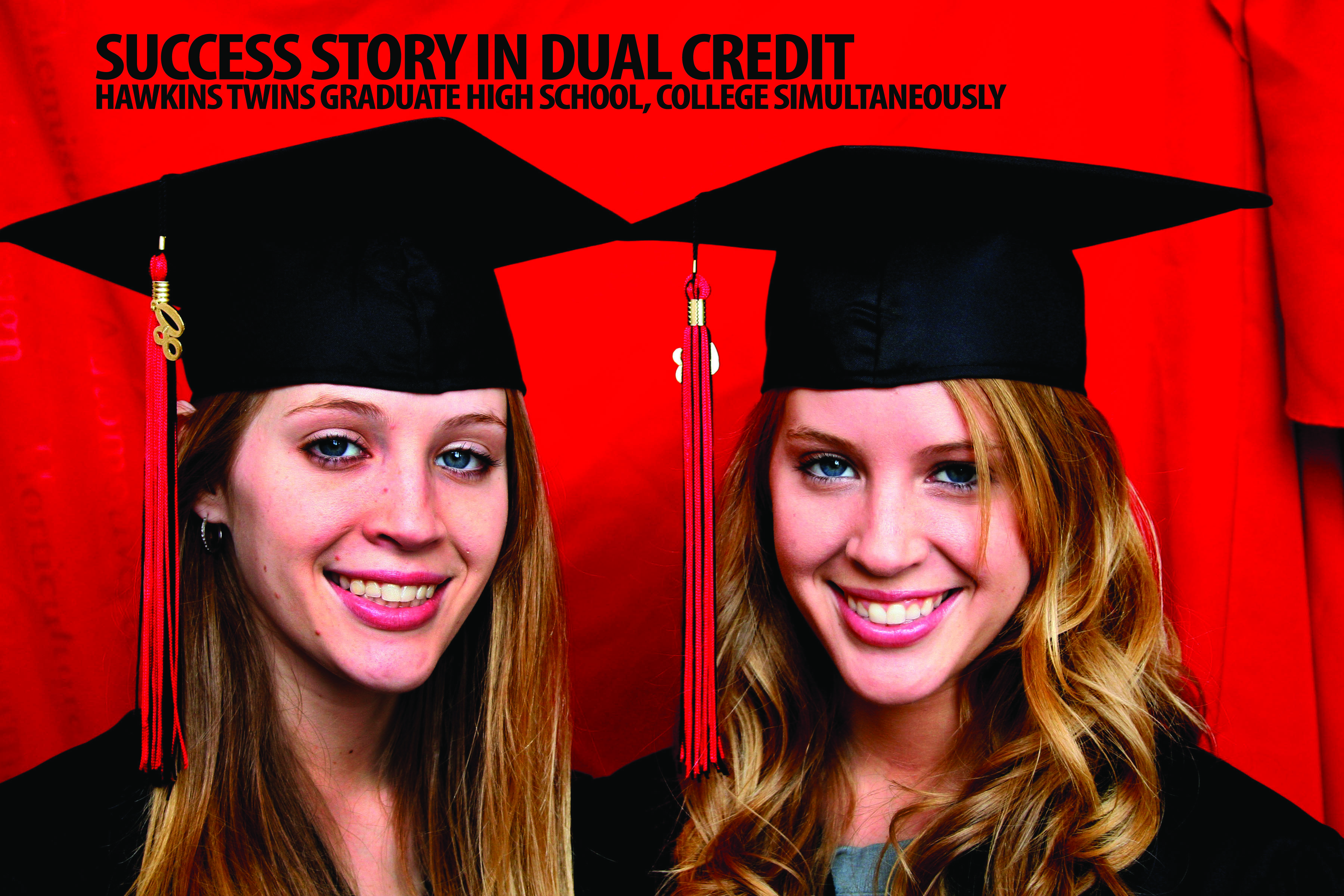 In high school, Maddy and Alex took a mixture of dual-credit and dual-enrollment classes through RLC. Dual-credit consists of accelerated classes which qualifying high school students can opt to take as part of their regular schedule and earn both high school and college credit. Dual-enrollment is overtime, so to speak, and consists of distance learning courses, online classes and night classes at RLC satellite campuses, such as the RLC Murphy-Wall Campus in Pinckneyville for Maddy and Alex. Their mixture of dual-credit and dual-enrollment hours was enough for both to graduate with an associate’s degree from RLC.

In addition to the accelerated path to higher education, dual-credit offers significant savings to area students and parents because it is tuition-free for students at participating in-district high schools.

The Hawkins twins saved their parents roughly $8,832 in tuition to RLC. That figure is much higher when calculated using the tuition rate at the university level. For example, in Alex’s case, 64 credit hours at the Southern Illinois University-Edwardsville undergraduate rate of $155 per hour would mean a savings of $9,920. St. Louis University’s undergrad rate, which ranges from $842.50 to $1,263 for full-time students enrolled in 18 hours or less, would calculate to $53,920 to $80,832 in savings for the Hawkins family.

Alex will be among the RLC graduates to physically cross the stage Friday night. Maddy can’t make it, but she has a good excuse. She and mom will be on the road to Texas where Maddy will accept a national Toyota Community Service Scholarship that could mean up to $20,000 for SLU in the fall.

Their mom recently traveled with them to Atlanta where they both accepted national scholarships from Coca-Cola worth $10,000. While they were there, the sisters interviewed with Coca-Cola officials for a chance of increasing their scholarships to $20,000 apiece.

It doesn’t stop there. Alex has been granted a President’s Scholarship for a full-ride for four years at SIUE where she will eventually enter dental school in Alton. She is the recipient of a Wendy’s Heisman Scholarship and Maddy is a finalist for a Scholar Athlete Milk Mustache of the Year (SAMMY) Scholarship. A panel of judges will choose only 25 winners from among thousands of SAMMY applicants and announce the results in the upcoming weeks. The judges this year are professional athletes Andy Roddick, Mia Hamm, Steve Nash, Tony Hawk and Michelle Kwan. Alex also won a $1,000 Principal Leadership Scholarship through PCHS. 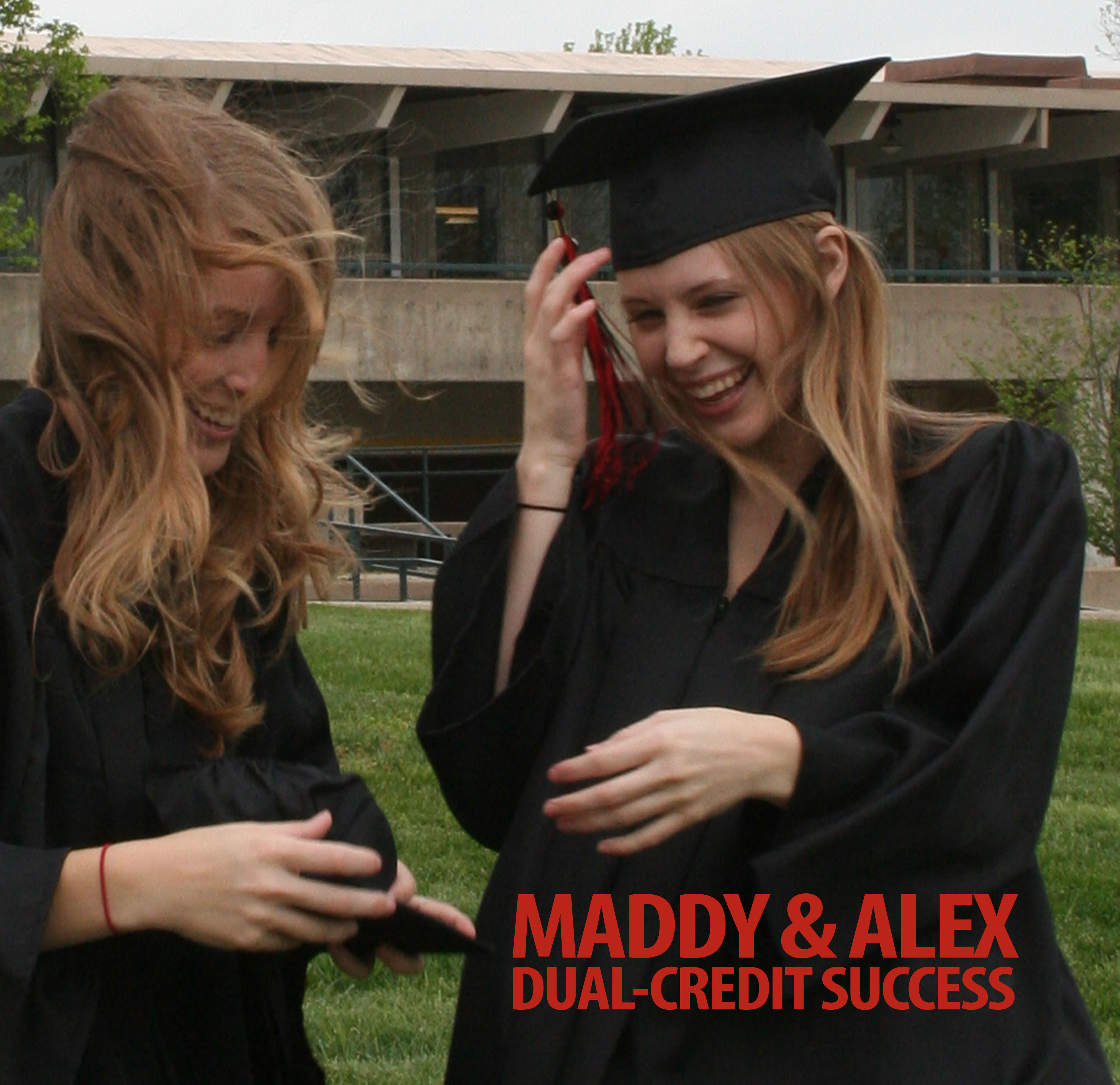 Since they were both deemed Students of the Month at PCHS this year, both were candidates for the Student of the Year Scholarship through Murphy-Wall State Bank in Pinckneyville. The shared opportunity put them in unfamiliar territory, Alex explained.

“It’s kind of weird,” she said. “We are not used to competing against each other for a scholarship. This will be the first time, I think. We try not to apply for the same ones.”

Alex won, however Maddy holds no hard feelings. She beams about being the recipient of a $60,000 Provost’s Scholarship to SLU. Because she is transferring in as a med-scholar, admission to medical school at SLU is an option her sophomore year. According to Maddy, being a med- scholar just about guarantees her acceptance into the medical school.

This school year, $880,000 in RLC tuition was saved by area high school students who took dual-credit classes. That figure is nearly double the savings compared to last year. The source of the surge was more participating high schools – the program is now in a dozen schools – and more dual-credit classes, according to RLC’s dual-credit coordinators Chris Kuberski, Liberal Arts Chair; and Math, Science and Education Chair Barb Davenport.

The Hawkinses agreed the dual-credit classes in high school were quality classes offering a good transition from one level to the next.

“They were not as hard as I think college classes can be, but they were harder than classes at the high school level,” Maddy said.

While a number of dual-credit participants may have a year of college completed by the time they graduate from high school, according to Kuberski, what Maddy and Alex have accomplished is special.

“I am not aware of other students who have done this,” Kuberski said of the simultaneous diplomas. “There may be, but I believe it is rare.”

Balancing a schedule of high school, night classes in Pinckneyville, classes on the RLC campus, science classes in Carterville, cheerleading, playing French horns in the high school marching band, serving as senior class and student council officers, competing in FFA, helping launch the county-wide Perry County Youth Court, and volunteering each year for everything from Locks of Love and Toys for Tots, to Operation Samaritan – one might think these co-valedictorians are too good to be true. Well … their mom thinks so too.

“They have set their own priorities and lived up to their own self-imposed expectations, making their mom and dad very proud,” Casey said. “As a parent, I admire their tenacity and motivation to achieve their own dreams and goals.”

Casey offers guidance to students as a counselor at Trico Senior High School in Campbell Hill while dad, Wayne Hawkins, offers everything from regular screenings to root canals at his office in Pinckneyville where he has practiced dentistry for the last 25 years.

One would be remiss to not mention their long list of honors. Both are four-time high honor roll students and have been listed in Who’s Who Among High School Students since they were freshman. They are each two-time recipients of the Reading for a Lifetime Award and members of the All-State Academic Team. In their senior year, they both were Illinois State Scholars, Merit State Scholars with ACT scores of 31 for Maddy and 32 for Alex, Prairie State School Scholars, Athlete of the Week, Student of the Month, candidates on homecoming court, members of the Southern Illinois Society for High Achievement and RLC High Achievers Scholarship recipients.

The Hawkins twins spared themselves years at the universities – significant when considering SIUE’s eight-year dental program and SLU’s medical school beyond the four-year track. Maddy estimates she will study at SLU for the next decade.

The transition from high school to college can be overwhelming and sometimes frightening for a new student. The right roommate can make or break the first year. Luckily, Alex is very familiar with her roommates-to-be.

“They rely on me,” she said of her brothers, Zach and Thad. “Living with them … it will be interesting.” Also interesting is the fact that their brothers, surprisingly enough, are also twins. They play baseball for the Cougars at SIUE.

“I think since all four just grew up together, not ever really knowing about the only-child syndrome, they have taken care of each other and just turned out really great!” Casey said.

Although Maddy will be miles away from her siblings, she won’t be too far. The SLU campus is only about 30 minutes from Edwardsville.

“We will still be close, but not too close,” Alex said.