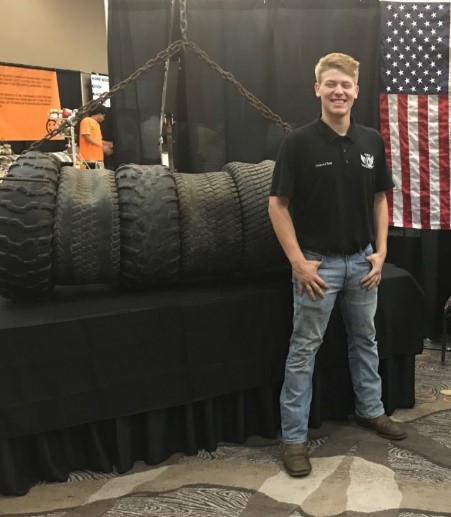 Dakota Tate stands beside his tire culvert invention. In October, the RLC alum was notified that he received a US patent for his work that he completed during the Jefferson County CEO program.

INA, IL (Dec. 27, 2021) – Rend Lake College alum Dakota Tate has been given an opportunity to recreate an idea that he developed in high school into a full-fledged business.

“It’s awesome,” Tate said. “I had always hoped that it would, and now it has.”

Tate was recently awarded a US patent for the tire culvert invention that he came up with during his time in the Jefferson County CEO program. Tate found out in October that the application for his invention had been approved.

Tate, who is from Bluford, was part of the Jefferson CEO program’s Class of 2019. Each year, the students are given the task of coming up with a business plan and an item or service to sell during the annual trade show.

Tate took one particular lesson to heart. During his time working on the family farm, he had noticed a potential resource in the number of tires used by the average farm.

“Mainly what I was trying to do was find a solution to the problem, and CEO board member Jeff Haarman said if you can turn trash into cash, you really have something,” Tate said. “Anything more than since then has just been gravy.”

“Tons of farmers go through tires over the course of a year,” Tate said. “There is nothing that happens to them after they are thrown away. What we ended up doing is a cheap solution that is also environmentally friendly.”

Once Tate came up with the idea, several associates with the Jefferson County CEO program helped it become a reality.

Local entrepreneur Lee Bob Willingham was instrumental in helping Tate to obtain his patent. Willingham invented the Bulli-Bone line of dog chew toys, and he is also a board member of the Jefferson County CEO program.

Willingham connected Tate with one of his business associates, Patrick Mixon of PMX Business Advisors, who helped him fill out his patent.

The purpose of the Jefferson County CEO is to ignite entrepreneurial spirits among local high school students in hopes that they will develop and contribute to the local economic development.

“Dakota is the exact kind of entrepreneurial mind CEO seeks,” CEO board member Jeff Haarman said. “One goal is to take thinkers and builders, dreamers and workers and turn their thoughts and dreams into reality through business connections and mentoring in our local community. Our goal with Jefferson County CEO is to show our young high school entrepreneurial spirits that they can build it, own it and grow their business right here in Jefferson County.”

"It was clear from day one of CEO that Dakota was an emerging leader and innovator,” said Corey Phillips, RLC Director of Auxiliary Services and former CEO facilitator. “His mind is always working. Dakota was typically the first person to class and often the last to leave as he soaked up all of the knowledge he possibly could from the Jefferson County business community.

“Dakota's strong work ethic and magnetic personality will take him far in life. I congratulate Dakota on his recent success and I know that he will continue to find success no matter how he chooses to define it."

Tate graduated from RLC with his associate’s degree this past spring. He is currently a junior at Murray State University studying agronomy. After finishing his bachelor’s degree, Tate plans to explore options for expanding his business while he continues to work on his family’s farm. So far, he has sold his invention to local farmers and other individual customers.

“It was the CEO program that led me to go to RLC,” Tate said. “And the teachers there gave me the tools I needed to succeed at Murray State. My time at Rend Lake is something I have enjoyed, and it is something I will always treasure.”

For printable photos, click here to be directed to a Google photos folder. 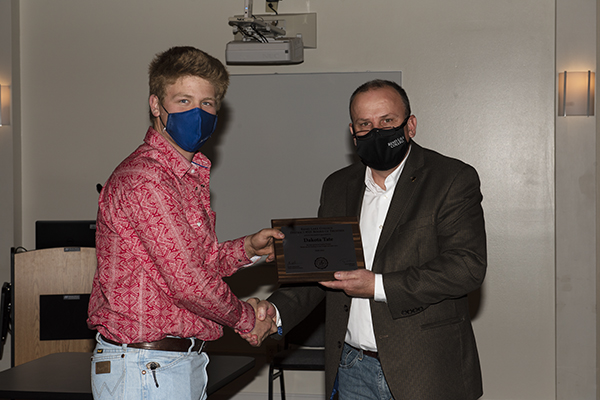 Dakota Tate, left, receives a plaque from RLC President Terry Wilkerson commemorating his time as the student trustee during a Board of Trustee meeting in April.