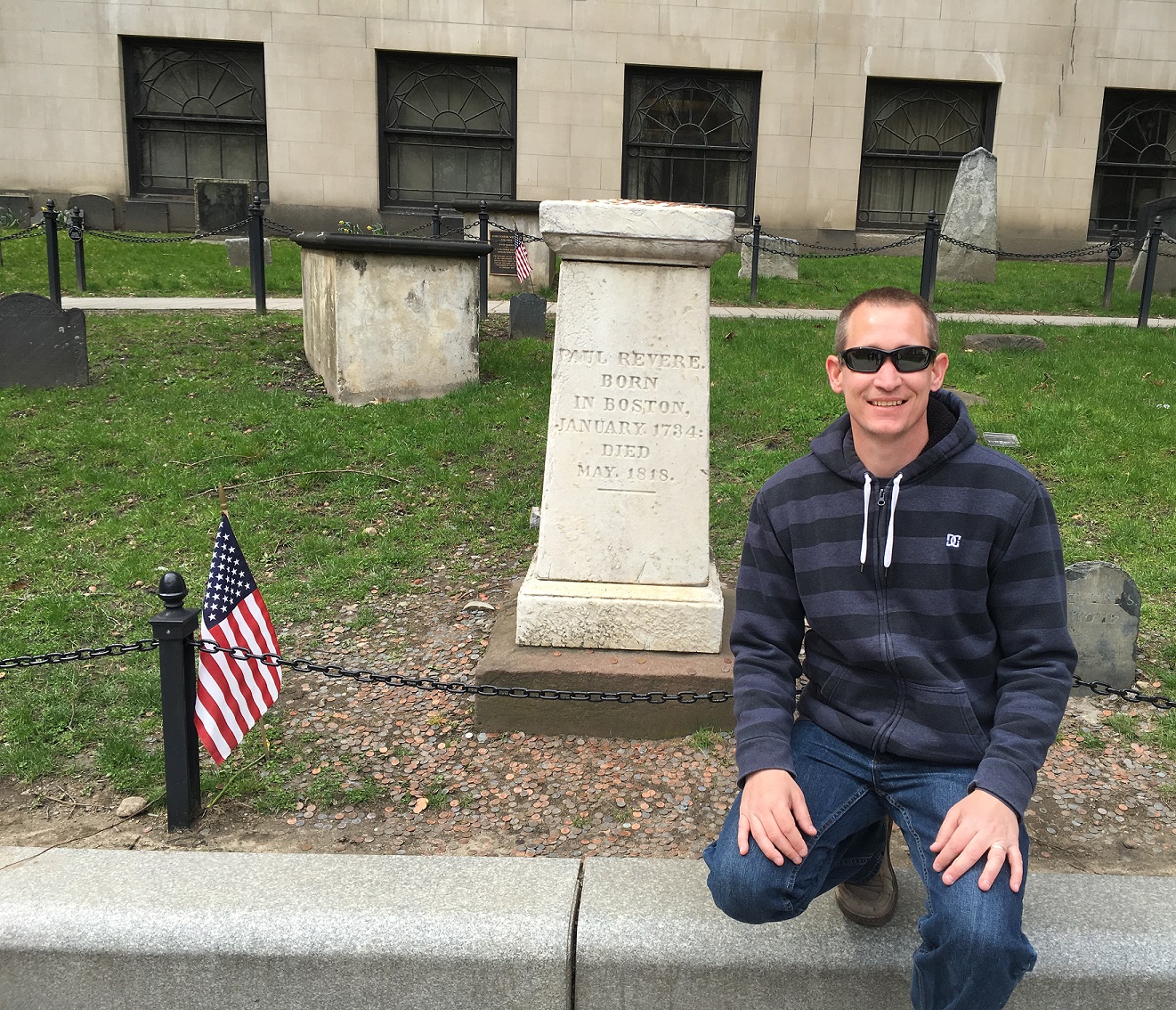 “For someone to recognize all of that hard work feels really awesome,” Brouwer said. “Since the day I started at RLC, I have felt at home, whether with my co-workers or the students here. They are so awesome. My students and I have had a lot of fun together and learned a lot from each other over the years, and it is one of the biggest honors of my life to teach the students of Rend Lake College. It really is.”

Brouwer started teaching at RLC in 2009, a few months after he graduated with a master’s degree in history from Southern Illinois University at Carbondale. He had originally intended to study zoology and biology, but after he chose a 300-level contemporary history course as an elective — it studied US events from World War II to present day — Brouwer knew within the first 10 minutes he needed to switch majors.

It was there where he learned that a history class does not have to be a recitation of dates and facts. From then on, he knew he would become a history professor who could – and would – make a difference.

“When I realized that I could rethink humanity and help others that sought to do the same —and potentially help make the world a better place in some tiny way — it just became a passion for me,” he said. “Being in the classroom with my students is one of my favorite places to be, period. … I fell in love with Southern Illinois and the Shawnee [National Forest], so it was a dream come true that a position opened up at RLC just after my graduation.”

Several of Brouwer’s former students have testified to the positive impact that he has made on their lives.

"The focus was never on the memorization of names or dates of various events; the focus rather was why these events were significant and how they impacted regular everyday individuals,” one student stated. "Nearly any individual can present someone with a piece of information they did not know before; however, I believe Dr. Brouwer personifies the much rarer trait of inspiring his students. Being one of those former students, I owe him a lot of gratitude, not only for sparking my own passion for learning, but for modeling what it really means to call oneself a professional educator."

"I’ll admit, at first I thought he was a little bit crazy when he would show up for our 8:00 am class as bright and vibrant as an afternoon sun,” another former student wrote. “It soon became clear that his vibrancy was from a place of genuine passion. He was thrilled to be teaching us about history. He really loved it! … While I enjoyed the content of his class, the impact was much bigger than just learning about history. Dr. Brouwer also taught me a lot about being a good person and embracing life with an open, empathic heart. Dr. Brouwer eats, sleeps, and breathes gratitude and compassion and this unique attitude permeates everything he does, including his teaching."

"He has mastered the ability to channel his passion, knowledge and pedagogical skills in such a way that students, even non-history majors, take all his classes,” Mitchell said. “He's a tremendous advocate for students and highly revered by faculty and staff at Rend Lake College."

RLC President Terry Wilkerson said: "Nathan models the ideals of an educator...taking pride and concern for his students and their path to their future.  I am proud to have him on our staff."

Vice President of Instruction and Student Affairs Lori Ragland agreed, adding: "Dr. Brouwer has a remarkable ability to engage and inspire students with his dynamic teaching style. He didn't skip a beat during the past year of remote instruction. Nathan capitalized on his passion, dedication, and organizational skills to continue teaching students in an online learning environment. Rend Lake College is fortunate to have Nathan Brouwer as an instructor."

Brouwer said one of the most important skills that can be taught in history courses is the ability to think critically. History has an endless cast of characters to draw stories from, and he often reads and rereads books in order to obtain fresh material that his students can relate to.

“The most important skill taught by history is the ability to critically think,” Brouwer said. “There isn’t one correct version of history, despite what many earlier generations thought. History is just one big argument, but any correct version has to be based on evidence and fact. Without the ability to think critically and the evidence to back it up, no one can really accurately understand history. They are simply spouting nonsense. And there is perhaps no better place to learn about critical thinking than in a college-level history course. People have surmounted the challenges of existence over the millennia because of a group of people that stood above the rest and made decisions that changed the face of humankind. They were only able to do this because they used critical thinking to move past the supposed limits that previous generations had told them were impossible. In addition to critical thinking, studying history also teaches students to problem-solve. In college-level history courses, students realize that nothing that had to happen in history. Events that have progressed human societies happened as the result of interactions between different people that were working together or against one another to create a certain outcome. In other words, history is — again — a debate over the course of humankind. Relatedly, the course of the future, just like the study of history, is in reality, just one big problem to solve. “

Brouwer was also recognized for his efforts to improve the RLC campus. He has served on several committees including the Oral Communication Assessment Committee, Learning Resource Committee the RLC Computing Committee, as well as many others. He has been a Dual Credit faculty contact for local high school history teachers for several years. He served as faculty advisor for Phi Theta Kappa and was the faculty advisor for both the History Club and the LGBTQ Club. He also held several diversity forums in which faculty, staff, and students discussed diversity at the college.

Brouwer has advocated for more diverse course offerings, such as Black American History and Latin American History, as a way to promote multiculturalism and equity in the RLC curriculum. He has developed several online courses within history and brought in several speakers to campus for presentations. The addition to the multicultural calendar helped expose students to new ideas and research. 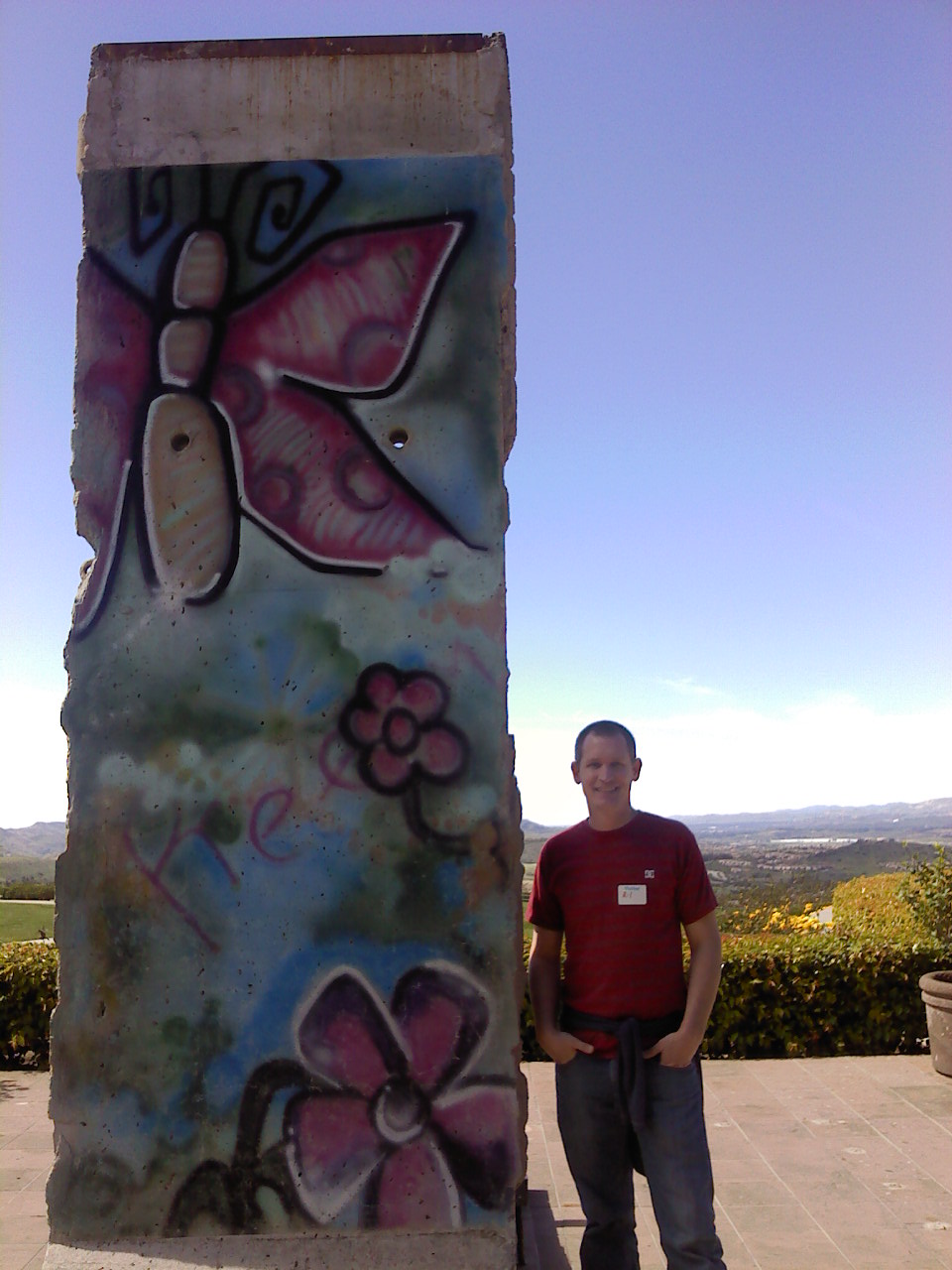 Nathan Brouwer stands next to a piece of the Berlin Wall at the Reagan National Library. Brouwer said the opportunity to teach in Southern llinois and witness student transformationis is one of the best parts about his job at RLC. (Click for larger image)

Brouwer was also recognized for his efforts to improve the RLC campus. He has served on several committees including the Oral Communication Assessment Committee, Learning Resource Committee the RLC Computing Committee, as well as many others. He has been a Dual Credit faculty contact for local high school history teachers for several years. He served as faculty advisor for Phi Theta Kappa and was the faculty advisor for both the History Club and the LGBTQ Club. He also held several diversity forums in which faculty, staff, and students discussed diversity at the college.

Brouwer has advocated for more diverse course offerings, such as Black American History and Latin American History, as a way to promote multiculturalism and equity in the RLC curriculum. He has developed several online courses within history and brought in several speakers to campus for presentations. The addition to the multicultural calendar helped expose students to new ideas and research.

“Historical thinking also includes the significant use of information previously gathered, whether by sociologists, anthropologists, or others, and applying that to turn information into action,” he said. “And perhaps most importantly, college-level history teaches students that the most effective people in history, by definition, became significant historical figures because they were willing to challenge the ‘status quo.’ The world’s greatest societies were formed by those willing to challenge tradition and consequently move society forward. We owe societies’ transformations to individuals and groups that challenged, and continue to challenge, societal norms and ‘rules.’ In addition, the historical profession has, in recent years, undergone a revolution. Before the 1970s; women, minorities, and ‘regular’ people, among others, were completely left out of the historical record. Can you imagine how inaccurate any version of history is that fails to account for the majority of the population? As part of the revolution in the historical profession, historians have started to move the focus away from just the elites of society by including a tremendous amount of research towards the actions of the ‘regular’ people and other groups previously disregarded and/or omitted from the historical record. In most cases, those ‘regular’ people banding together proved to be the most significant engine of change of all. In short, by studying the people that ‘made things happen,’ the supposedly impossible becomes possible. Ask Nicolaus Copernicus or Marie Curie or Martin Luther King, Jr. Oh, wait…they are dead. Or are they?”

He is a winner of the Edward O'Day Research Writing Award. He has also been a recipient of the SIU-C History Alumni Award, Stanley Zucker Award for Best Original Research Paper by a Graduate Student, and was awarded the Phi Theta Kappa (PTK) Faculty Excellence Award in his first year of teaching at RLC. That award is voted on by RLC students who are members of the PTK honor society.

Brouwer said the best experience in teaching is watching a student transform from someone who does not care too much about their future into a confident individual who is willing to do anything to chase a dream. Watching those transformations are, by far, his fondest memories, he said, and to be put in the position to help these students has been the “highlight of my career, without a doubt.

“It is such an honor to be able to teach them as well as learn about life from them,” Brouwer said. “The first thing I tell any class is that I genuinely care about them and their future success and that no matter how hard their life has been, or currently is, college is one of the few things that can help them achieve their dreams and wholly change their lives. I am certainly living proof.”

Brouwer and his wife Krista live in Carterville, and they have one daughter, Jessica, who graduated from the University of Missouri and now works in Kansas City. 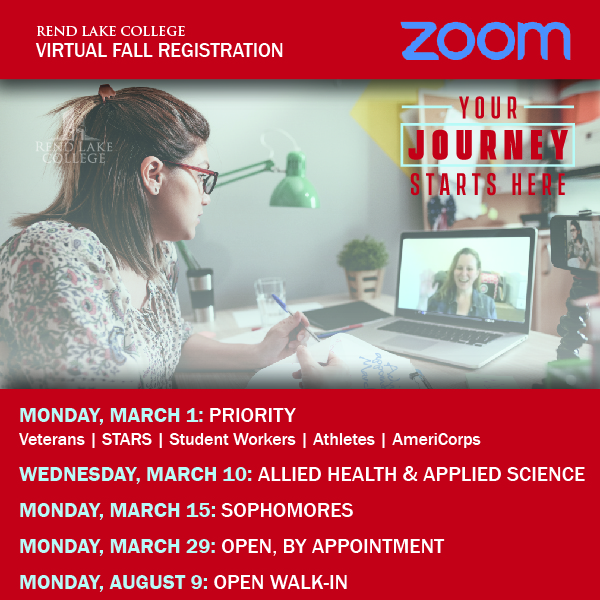