COVID Protocols, Program Recognitions And Hub Ground Breaking Are A Few Of The Headlines In 2020 At Rend Lake College

(INA, Ill.) - The year 2020 will be a year that not anyone will soon forget. Several noteworthy events occurred at Rend Lake College, from adopting new policies and changes due to the COVID-19 pandemic to earning top recognitions and breaking ground on the much anticipated of the Hub.

Here is a list of the top headlines that happened at RLC this year. 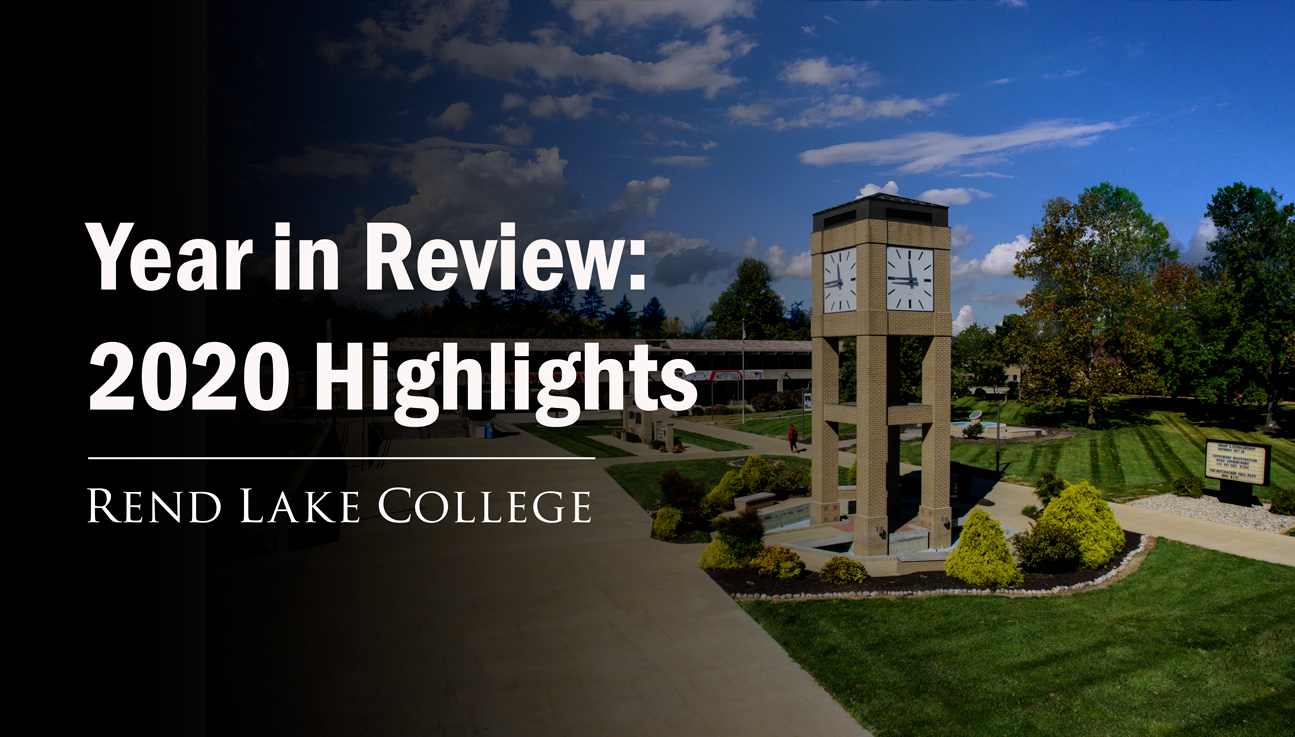 COVID Changes Business, Courses At RLC: The COVID-19 pandemic changed several aspects of life for much of the year, and coursework at RLC was no different. The college monitored the situation closely and adopted several safety protocols in accordance with national and local guidelines. All classes went to online instruction on March 23 and remained remote for the rest of the semester.

In June, RLC initiated a plan for the Fall 2020 semester based on known facts and predictions that included both online and hybrid courses. A separate plan was instituted for the Spring 2021 semester, which will begin on Jan. 11 with online or remote courses. Students will not be on campus for the first four weeks of the semester. In addition to increasing its offerings of online courses, RLC waived all online fees for the semester.

RLC Earns National Recognition For Its Trade Programs: Rend Lake College’s trade programs rate among the best in the nation, according to a recent ranking from education website Learn.org. Learn.org announced in October that it had published its list of the 50 Best Trade School Programs for the 2020-21 school year and RLC landed in the No. 18 spot.

RLC Breaks Ground On ‘Monumental’ Hub Project: Months of fundraising have paid off for the Rend Lake College Foundation as the college broke ground this past August on a major addition and renovation project for the Learning Resource Center. The construction phase of the Hub campaign is underway as RLC officials turned over dirt with the ceremonial shovels on the Ina campus. The expansion will help tie the LRC to the center of the campus, making it a “Hub” of learning for all students attending college.

RLC Dedicates Rec In Honor Of Wayne Arnold: The RLC Board of Trustees approved in April the naming the REC after the Father of Fitness Wayne Arnold, who had been an advocate for building a center on the campus as early as 1981. Arnold worked at the college in 1963 when it was then Mt. Vernon Community College as part of the school’s physical education program. He was an original staff member when the college became RLC and worked for another 22 years.

RLC Medical Assignment Project Recognized As One Of The Best In Illinois: An online resource for the medical assistant community ranked Rend Lake College’s Medical Assistant Program as one of the best programs in Illinois. The website medicalassistantadvice.com, established in 2012 with the sole aim of providing accurate information to medical assisting students and professionals, announced in September that RLC was at No. 9 in the state for 2020’s list of Best Illinois Medical Assistant Schools.

RLC Expands, Enhances Visual Communications Program: Rend Lake College expanded its design program this fall with new course offerings and a name change. The Visual Communication Design program (formerly known as Graphic Design) is staying on trend with the innovations in the field of design to include not only graphic design print and production training but also advanced web techniques, MOTION DESIGN and design thinking.

RLC Receives $5.3 Million Grant For New Allied Health Building: Construction of a new Allied Health building at Rend Lake College could be starting soon thanks to $5.3 million in funding from the Rebuild Illinois capital plan. RLC was one of 15 Illinois community colleges to receive funding for building projects, Gov. J.B. Pritzker’s office said.

RLC Receives Grant For Wi-Fi Expansion: Rend Lake College students saw expanded WiFi internet access on campus after the college was awarded a Career and Technical Education Improvement Grant. The Illinois Community College Board announced RLC as the recipient of $88,027 to help expand WiFi capabilities on campus. RLC was one of 21 community colleges in Illinois to receive funding, according to the ICCB.

RLC And Comprehensive Connections Partner To Combat Addiction, Improve Local Workforce: Rend Lake College joined forces with the Behavioral Health and Substance Abuse Divisions of Comprehensive Connections in Mt. Vernon to expand services, thanks to a new grant initiative. RLC recently received $100,000 this past fall through the Illinois Community College Board Innovative Bridge and Transition Grant.

RLC Tuition Stays Flat For Fourth Straight Year: With tuition on the rise at neighboring institutions, Rend Lake College is able to maintain an affordable cost for its students once again. During a recent meeting in March, the RLC Board of Trustees approved keeping the cost per credit hour rate at $110 for the fourth straight school year. The last tuition increase the board approved was in February 2016.

There is a lot more in store for the college in 2021. Find out about the latest news happening at RLC by visiting rlc.edu/pressroom.