The event was hosted by Careers without Limits, a recently-formed student support organization for those pursuing non-traditional careers, which include any in which a specific gender makes up less than 25 percent of the workforce. Click on the images below for larger views.

Kristina Shelton, RLC Perkins Coordinator, said the event was made possible through the Special Populations Support Grant issued through the Illinois Community College Board. She continued, "Our guest speakers were great role models for female students interested in a career in criminal justice. It's important for students to know they can succeed in their chosen occupations." 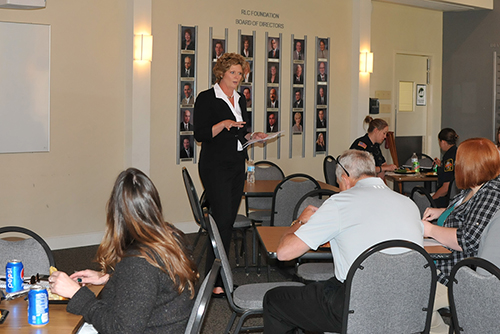 Judge Weber used the word "persevere" to speak about her background and how she came to be a judge in Jefferson County. She said, "One thing I wish someone had talked to me about was perseverance. I want you to understand how to persevere and make it happen. I had all these excuses as to why I didn’t want to go to college, or finish law school, or become a lawyer. Every time you work hard for something, the outcome isn’t always positive, but you have to persevere."
(ReAnne Palmer / RLC Public Information) 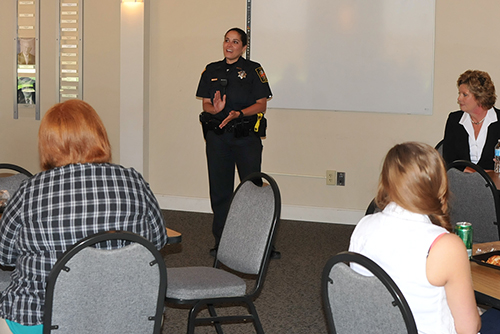 Officer Webb explained the challenges she faced as an officer and volunteer firefighter that brought her to her current position with the MVPD. She said, “Being a female, I figured I’d get made fun of or mocked. I’m surrounded by men, but I was always just one of the guys. I thought I had to keep proving myself. When I joined the Mt. Vernon Police Department, I first thought I wasn’t cut out for it, but after a while, I realized I want to be as good as anyone else. It was a drastic change for me. Now I’m trying out for the Drug Task Force, and I don’t want my being female to be an excuse. If I make it, I’ll be the first female officer on the task force.”
(ReAnne Palmer / RLC Public Information) 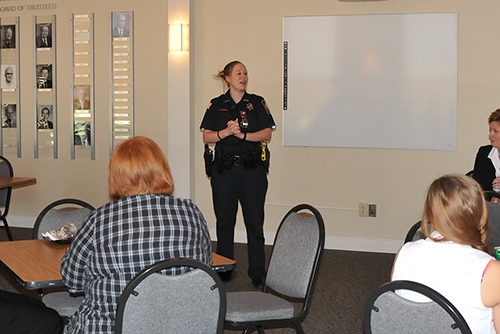 Officer Peas attributed some of her success as a female officer to the connections she made in college. She said, “I’ve always wanted to help people. I have the gift of gab, and I love my job. It’s typically a man’s job. They’re police ‘men’ and patrol ‘men.’ My journey started at Rend Lake College and I’ve kept my connections here. It helped me get my foot in the door. It’s not easy, but very worthwhile.”
(ReAnne Palmer / RLC Public Information)