INA, Ill. (Feb. 25, 2017) - Jefferson County Sheriff Travis Allen is a proud product of Rend Lake College. From struggling high school student to master’s degree graduate, he shares his story of success, philosophy on law enforcement and advice with anyone interested in the field.

Allen graduated from Waltonville High School in 2002. Having had his share of struggles in high school, he said that following graduation, college wasn’t really an option he considered.

“I wanted to go out and achieve the world,” he explained. “I quickly realized that that wasn’t happening. I was working for minimum wage loading batteries in a warehouse. So, one day, I thought, ‘You know what? I’ve always wanted to be a police officer.’ So, I talked it over with my parents and enrolled here at RLC in the Criminal Justice Program.”

Allen completed his Associate in Applied Science Degree in 2005. But, before he had even graduated, the future sheriff was offered a position with the Army Corps of Engineers through an internship program, giving him the opportunity to gain valuable experience. His work at RLC and his new job helped convince him to continue with his education.

“I had a lot of friends who went to Rend Lake. Being from Waltonville, the smaller classes and locations were great too. I’ve never been in the position where someone else was going to pay for me to go off to school, so doing things affordably was always important to me. It gave me the opportunity to work all through school. I knew the Criminal Justice Program here was great. Once I enrolled, I absolutely loved it. It saved education for me. It was the first time I loved school.”

Describing himself as a student who didn’t enjoy high school, he said that he struggled for most of his four years. He joked that any of his high school teachers would have likely laughed at the thought of him going on to earn degrees.

Yet, go on to earn degrees is exactly what he did. After graduating from RLC, Allen transferred to Greenville College, graduating in 2007 with a bachelor’s degree in Organizational Leadership.

Quickly after that graduation, he earned his first job in law enforcement with the Mt. Vernon Police Department. Around that same time, Greenville launched a master’s degree in Management Practice. He graduated from that program in 2012.

“It was so important to get that spark early on. Rend Lake College let me finally study things that I had an interest in. I got to do hands-on work that held my interest and that I got excited about. I really think RLC saved my academic career. If it hadn’t been for finding that interest, I probably would have ended up graduating from high school and going into the workforce,” he expressed.

Allen said his passion for law enforcement came from a mixture of his desire to work in a field that offered a different challenge and experience every day combined with the aspect of helping others and making a difference in his community.

In fact, he cites one of the biggest mistakes of his life as leaving the Mt. Vernon Police Department to take a full-time office job while working on his master’s degree. He said that at that time in his life, he saw dollar signs and a great benefit package, and thought that was exactly what he wanted.

“I really hated everything about that. I gained some great experience, but coming in every day and working in a cubicle was really the worst thing for me. But, everything has worked out. After a few years, while I was in the office job, I started working part-time for the Ina Police Department,” Allen said.

From that part-time position, he was promoted to sergeant and eventually interim chief. So, in addition to managing 60 people in his full-time, cubicle office job, Allen was also running the Ina Police Department and still studying for his master’s degree.

“I was a very busy person,” he said with a laugh.

“It just got to the point where I hated my job. Now, that’s not to say it was a bad experience. They provided me with a lot of management experience and training. It just was not the setting I thrived in. It really showed me what I actually wanted to do. Luckily, my wife got a new job that allowed me to take a pay cut to come work for the Ina Police Department on a full-time basis. I was the village’s first full-time police chief.” 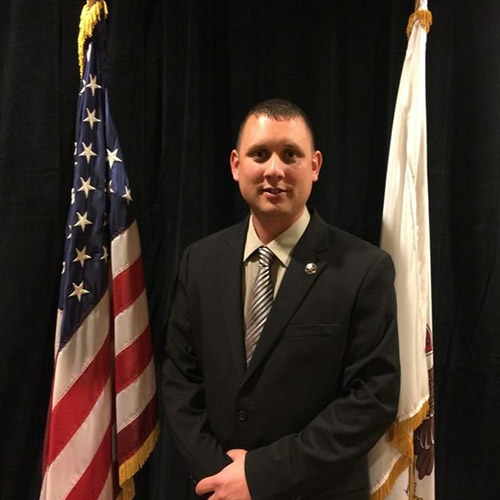 Allen said his favorite thing about the new position is being involved with the community and shaping the Jefferson County Sheriff’s Office into being the most people-focused department in can be. He said with all the recent negativity surrounding law enforcement, he wants to make sure his officers break the mindset of focusing on “just throwing bad guys in jail” and instead putting the priority on “serving and protecting the people.”

“There’s no question, it’s a time of change in the field. We have to change our mindset. We have to change how we do business. I mean, obviously, we keep locking people up, and it doesn’t seem to be working. Einstein said the definition of insanity was doing the same thing over and over and expecting different results,” Allen explained.

“So, we’ve put a focus on being active with the children in our communities. We want to have a lot of activities with youth to show them that the police are their friends and neighbors. We have to change the mindset of an entire generation if we want to be successful. I just don’t feel like that ‘throw all the bad guys in jail’ mentality and not focusing on serving the community is a recipe for success.”

His biggest piece of advice for those interested in entering the law enforcement profession is to get your associate degree in Criminal Justice, but then focus on another subject for a bachelor’s degree. He has no regrets earning his bachelor’s and master’s degrees in business-related fields.

“This is my opinion. You might be better suited getting the bachelor’s degree in in a different field. If you are on the fence, a bachelor’s in Criminal Justice might limit your career options. What happens if you get out there in the field and don’t like it? A lot of law enforcement agencies don’t necessarily look for a bachelor’s in criminal justice. I can teach you how to be a police officer. The better-rounded a candidate is can be very important. We learn a lot of what we need with that associate degree and then the academy. What I’m looking for is that if you have a bachelor’s degree, it shows me you are dedicated and trainable. I don’t care so much what it’s in. I tell students who ask me, go into something you are interested in. You are going to be more likely succeed.”