INA, Ill. (Dec. 7, 2016) - Rend Lake College student Tyler Huie is torching the competition. The aspiring welder out of Christopher is quickly making a name for himself by burning up the track as an amateur dirt bike racer.

This season, Huie faced the toughest competition to date. The result was a dominating first place overall finish in one category and a second place finish in another.

“Honestly, I was kind of surprised. I came into the season expecting a top 10 or top five finish,” Huie said of his success.

Why the modest expectations? Well, this was Huie’s very first season racing at this level.

“I hope to take the step up to B Class next year. That’s a higher level of competition. I want to see how I do there. It will be the same series I did this year, just at higher speeds. In the meantime, I’m getting ready to do an indoor series. I’ll be going up to B Class for it. I did C Class indoors last year and won all three of the divisions I was running in.”

Now, for some fundamental lessons in dirt bike racing. The sport is split into several classes. The higher up the classes a racer climbs, the tougher the opponents get and the faster the races run. The classes culminate with Class A, the end goal for many speedsters.

The various classes also have several sub categories ranked by engine size. For example, during his last season, Huie competed in Class C and raced in both the 250cc and 450cc brackets. With 450cc being the largest and fastest engine allowed. 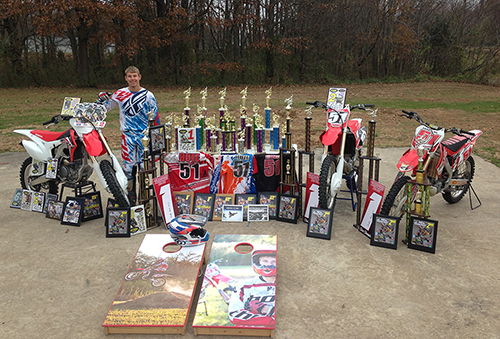 Tyler Huie, Christopher, shows off some of the hardware he's collected over his short racing career. In spite of his success, Huie remains humble and said despite the outcome, it's great to be doing something he loves. Click on this image for a larger view.

In addition to his racing, Huie is working on earning his Associate in Applied Science in welding at Rend Lake College. He said that he got into welding during his junior year of high school.

“I saw it as a class to get out of real classes,” he said with a grin.

One of the major benefits of the program is its ability to work around Huie’s schedule, allowing him time to both race and work.

In addition to taking classes at RLC, Huie also comes to work at RLC as a member of the Maintenance Department. He said it is a great opportunity to earn some hands on experience while taking classes while staying central.

It also gives him the opportunity to visit with is mother, Jean Huie, executive assistant to the Vice President of Academic Instruction.

As for his racing endeavors, Huie’s last circuit ran from May to late October and consisted of seven events where he took part in multiple runs for his different engine classifications.

While he has been riding dirtbikes his entire life, Huie has only been taking part in racing at lower levels for around five years.

“My brother-in-law got me into it. He saw my bike. He used to have one and race, so he started to get me into it. He had to help talk my dad into if for me too,” Huie joked.

Currently, he’s getting ready to kick off his next round of competition, taking part in an indoor circuit that runs mostly out of Kentucky. He said he makes an effort to try and get some ride time in every week. Staying on top of his game is important. It doesn’t hurt that he absolutely loves being on the bike.

Huie much prefers outdoor racing. With longer tracks outdoors, racers are able to reach higher speeds. Indoor tracks tend to feature many more technical obstacles that slow the speed down and cause racers to be more meticulous with their runs.

“I get to meet a lot of different people. There’s a lot of interesting folks that race. We met one guy who has an old school bus outfitted to haul his bikes around. After one race, he talked us all into going to Pizza Hut after the race. There had to have been 50 of us trying to cram into this place with like one table and a few booths. That was something to see,” Huie said.

Huie said that many of the competitors run against each other several times throughout the season, offering a chance to get to know the competition and make friends. 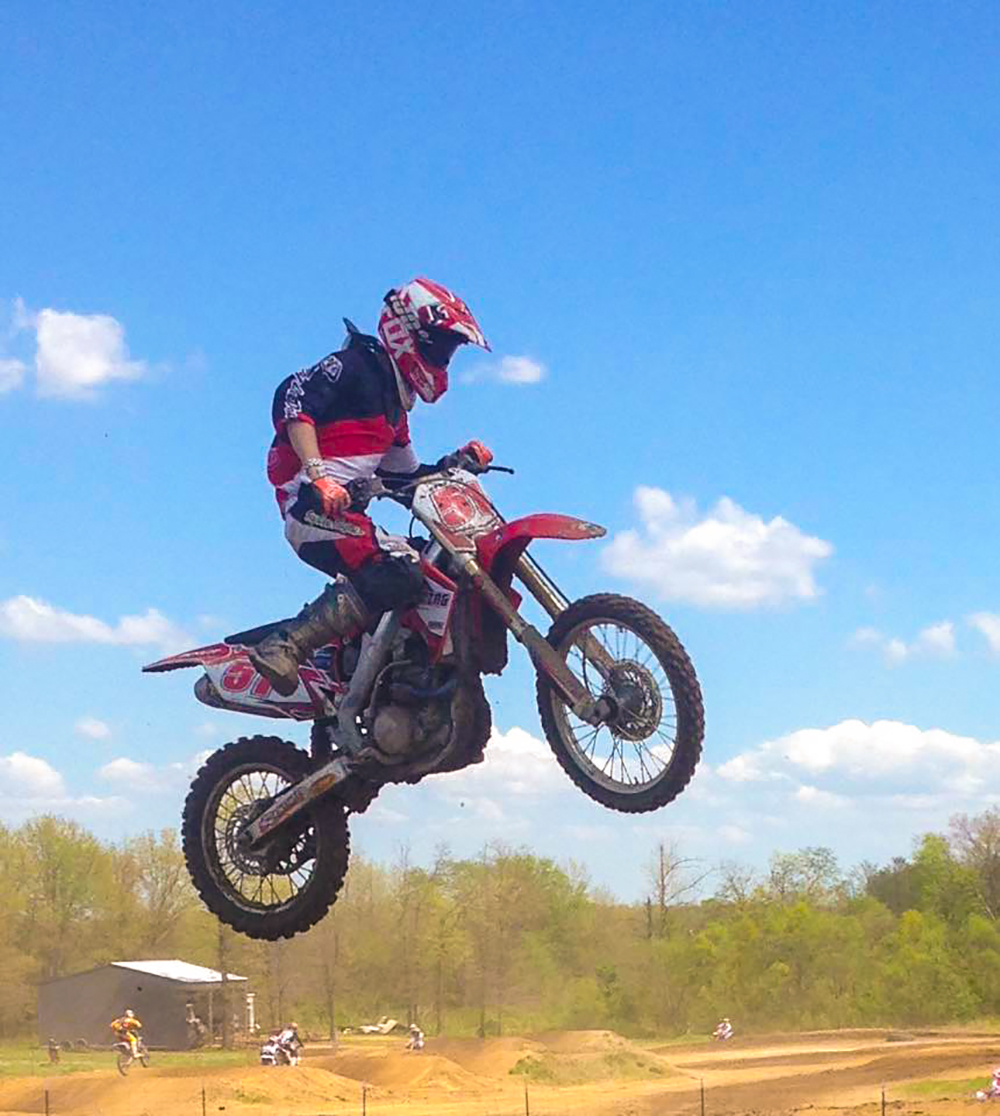 Tyler Huie, Christopher, tears up the track during one of his outdoor races during the 2016 season. He took home a first place and second place overall finish in his two categories of competition. Click on this image for a larger view.

He plans on looking at tech schools to continue his education after Rend Lake. But, he said that he’s currently taking things one step at a time. He said he’s mostly focused on staying around home for a little while longer.

Huie had already managed to earn one welding certificate before he even graduated high school by taking night classes in his spare time.

The biggest project Huie has undertaken was the construction of a hog hoist in one of his RLC welding classes.

“It’s nice to get away on the weekends. I’ve always been riding dirt bikes, so this lets me do something that I’ve always really liked. That’s all I wanted to do growing up. I just wanted to be out riding. When I’m out there, I’m not really thinking about anything else. I’m just zoned in on the race,” he explained.

“You need to start them early,” he laughed. “It seems like a lot of money, and it is. But, it’s like everything else. It’s worth it if you want to do it.”

Huie said that he would like to see how far he can push his racing career. He started late for someone thinking of pursuing racing professionally, but he said he’s wanting to climb as far as he can.

If he’s not out racing, Huie said you can probably find him out hunting or fishing. 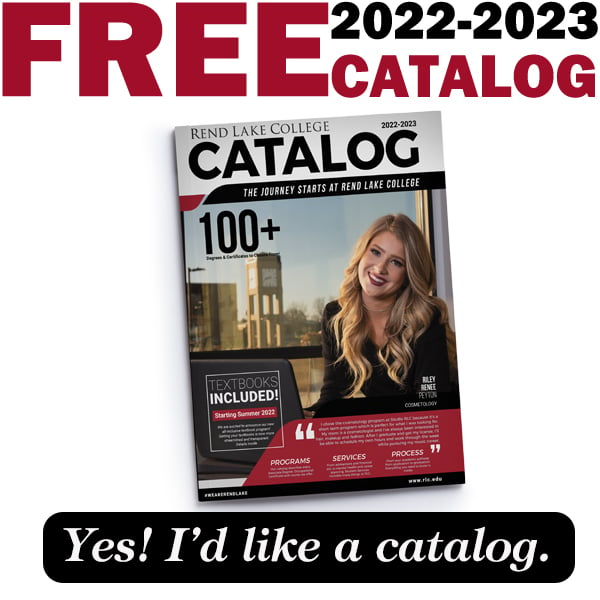