INA, Ill. (Nov. 16, 2016) - How does a Rend Lake College student go from earning certifications in Welding and Automotive Technology to professionally assisting with the training of NASA’s astronauts in the largest pool in the world? That’s the story of Jared Whitehead, and it’s a fascinating tale of desire, perseverance and luck.

Whitehead grew up locally, graduating from Benton Consolidated High School in 2005. His first step out of high school was an easy one. With his mother Marcia Whitehead employed at Rend Lake College in the TRiO Program, Jared knew that a RLC education was always going to be his launching point.

“It was kind of a no brainer,” he joked.

Initially Jared planned on doing something in the water. His initial plan was to study Marine Biology. But, he explained that the more he researched the field, the more it didn’t seem to fit his career aspirations. So, he went the practical route, studying Welding and Auto Technology, earning as many certifications as he could.

After his two years at RLC, Jared’s career started like anyone would have expected. With his education, he was able to land a welding job at a local “mom and pop” shop. He said it was great experience and that’s where he thought he would be for the foreseeable future.

But, life happens and opportunities arise. After a few years, a position opened at a larger welding facility that also handled mine repair. Jared saw it as the perfect opportunity to advance his career and diversify his skill set. He spent four years applying his trade before the tumultuous mine industry caught up. He found himself laid off.

It was point in his life where he was forced to explore other options. While working as a welder, he developed a passion for jujitsu, and post-layoff explored trying to make a career out of that interest, but he wasn’t able to find an opportunity to turn the martial art into financial gain. So, it was time to go back to the drawing board.

“I heard about underwater welding. I thought that sounded like a great opportunity. It let me be in the water like I had initially wanted and use my welding training,” Whitehead explained.

“So, I decided to move to Florida and attend commercial dive school. I ended up enrolling at CDA Technical Institute in Jacksonville, Fla. It was a 20-week program where the courses provided everything you needed to know. You also bought all your own personal gear with the program, so it was kind of like having a starting kit already in place when you finished. I finished that program in 2014.”

So, here’s where it gets really interesting.

While back in Benton, visiting home, Whitehead was at his church when he was asked to come forward and share his story so far. As fate would have it, someone sitting in the building that day had connections with a very prestigious government organization, the National Aeronautics and Space Administration.

“A NASA employee came up to me and congratulated me. She started telling me about the dive pools at Houston where they train astronauts. I had no idea that was even a thing. She gave me a point of contact over there, and I figured ‘What do I have to lose?’” he said.

“I ended up getting the interview and getting the job. Next thing I knew, I was moving to Houston, Texas. Here’s the funny thing though, it all comes back to the welding and auto background I built at Rend Lake College.”

In order to work as a diver in NASA’s Neutral Buoyancy Laboratory (NBL), Whitehead needed to reach a certain number of dive hours, a requirement that, at the time, he did not possess. But, because of his education and professional background in welding, NASA brought him onto the manufacturing side of the team, building the mock-ups the astronauts practice on while in the NBL. From there, he was able to finish his dive requirements and eventually transition to working as a full-fledged Dive Operations Specialist.

The NBL is an astronaut training facility. A full-sized replica of the International Space Station sits in the largest pool in the world to help astronauts train for what it’s like to work on projects in the weightlessness of space. Every training session is manned by a team of divers to assist in the day’s exercise. Divers operate cameras, provide safety and assist the astronauts with switching out the tools needed for the training. In some cases, astronauts can train for years on a specific repair that needs made. 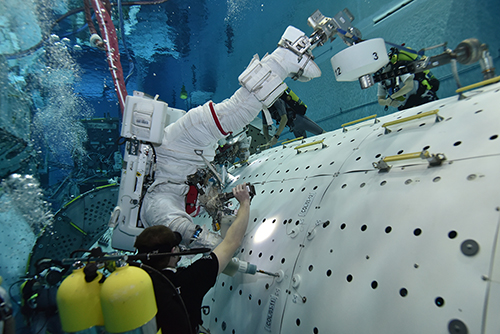 RLC alumni Jared Whitehead assists as a Diver Operations Specialist, assisting an astronaut with training at NASA's Neutral Buoyancy Laboratory in Huston, Texas. Click on the image for a larger view.

On days where astronauts aren’t training in the pools, divers like Whitehead, are busy at the NBL doing maintenance on the mock-ups and test stations. They are also spend time creating check lists for the next training dive to make sure everything runs smoothly and efficiently.

“It really is the coolest job ever,” Whitehead expressed. “I never dreamed I would be working at NASA. It was never even something I considered. I thought I was going to end up off-shore, traveling and doing welding work. But, I’ve been here for two years now, and it’s been absolutely fantastic.” 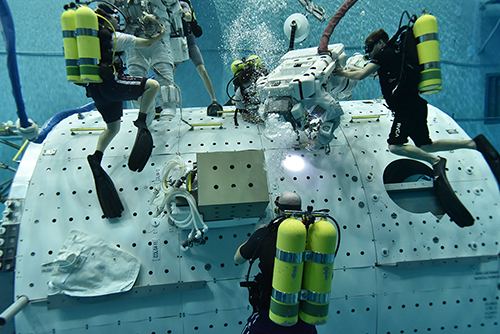 Jared Whitehead transformed his RLC Welding and Automotive Technology education into a career with NASA, diving in the largest pool in the world to help astronauts train on a simulation International Space Station. Click on the image for a larger view.

Even though he’s only been at the NBL a short time, Whitehead already has a pretty cool story to share.

While storied astronaut Scott Kelly was preparing for his final, record setting space mission in October of 2015, Whitehead was one of the divers in the NBL assisting with Kelly’s training. NASA was interested in how Kelly’s 340-day space mission impacted him physically. So, all preparation was also carried out by Scott’s identical twin Mark. Given the unusual nature of the mission, TIME Magazine filmed much of the training, which features the NBL and offers a glimpse of Whitehead acting as float diver.

For an incredible, detailed look at Whitehead’s office, a video of exactly what happens at the NBL can be found on NASA’s YouTube page by searching “NASA VR/360 Astronaut Training: Space Walk.”