INA, Ill. (Aug. 4, 2016) – Rend Lake College’s own Beth Mandrell, Reference Librarian, was recently elected president of the Network of Illinois Learning Resources in Community Colleges (NILRC) Board. As president, she will serve a one-year term.

Mandrell officially took office at the board’s regular meeting in July. During fiscal year 2015, she served as president-elect and will serve as the past president during the 2017 fiscal year. The college’s library – the Learning Resource Center – has been a member of the NILRC for many years, during which time Mandrell has served on a number of committees. 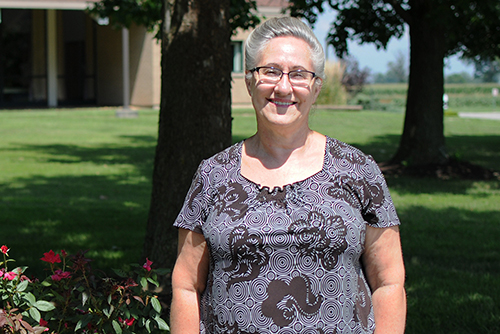 As president, Mandrell said she’s looking forward to working on and completing three big projects with NILRC committees and the board. The first is working diligently to move libraries from using American Library Association Information Literacy Standards to Framework for Information Literacy for Higher Education, which better aligns libraries with today’s student learning success. She also said a new strategic plan and website are on the agenda.

“NILRC has never developed a formal strategic plan so we are working on that now,” said Mandrell. “We’re also completely re-vamping the NILRC website, which will be completed during the year that I’m serving as the president. All of these projects play an important part in NILRC being a major supporter of Illinois libraries.”

As one of the oldest community college learning resources cooperatives in the nation, the NILRC enables colleges to purchase electronic resources at a discount and be a part of grant opportunities. Members can also participate in professional development activities. Additionally, the NILRC keeps librarians at the colleges up to date on innovative technology and practices through multiple outlets. Mandrell has been active in the organization since 2002.

Mandrell has been employed full-time at RLC since September of 1999. She holds several degrees and certificates, including an Associate of Arts degree from RLC, a Bachelor of Science degree from Greenville College, and a Master of Library and Information Science from Drexel University.