RLC's Kevin Weston selected as Teacher of the Year by IDEA

INA, Ill. (Nov. 4, 2015) - Kevin Weston, Rend Lake College's Architectural Technology Professor, has been named the R. Tim Phillip Teacher of the Year for 2015 by the Illinois Drafting Educators Association (IDEA). The announcement was made at the IDEA's annual conference on Oct. 15 at Illinois State University.

Though Weston was not in attendance at the IDEA annual conference to hear the announcement first-hand, a rarity for the former-president of the organization, he did receive a visit last week from Brian Rick, Vice President of the IDEA and RLC alum. Weston was hosting the Illinois Board of Higher Education's Faculty Advisory Committee's meeting on RLC's campus the day after the annual conference. 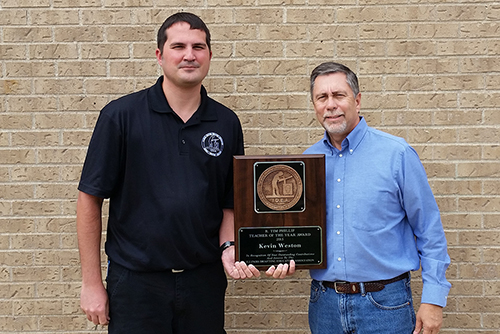 Kevin Weston, RIGHT, accepts his Teacher of the Year award from Brian Rick, LEFT, on RLC's campus last week. Weston was hired as an instructor for RLC's Architectural Technology program in August 1992 and is currently working on his 24th year as a faculty member. Rick works with local Career and Technical Education programs at the Franklin and Williamson County Regional Office of Education. Click on the image for a larger view.
(Submitted Photo)

Weston is a veteran of teaching RLC's Architectural Technology program with his hands in many other professional and collegiate activities. In addition to being an active member of the IDEA and the Faculty Advisory Committee, Weston has helped to create the annual Illinois SkillsUSA Architecture and Drafting competition and has served as a contest supervisor for the last 10 years. He has also been the Regional Director for the IDEA's annual Drafting & Design Competition, held every spring on the RLC campus. In 2012, he was elected as the IDEA President.

When asked about the award and his heavy involvement both at RLC and in the professional realm, Weston said, "You've got to be involved if you're going to change anything, and to keep up with the changes and your colleagues."